If you would like your business or organization information posted here on our community page
please email marketing@bartoncounty.com

We've all seen the headlines – inflation is high. Supply chain issues, labor shortages and more can impact investors. We'll discuss historical and current inflation examples, as well as detail current planning implications and strategies investors can use to help mitigate inflation risk in the future.

Tune into this webinar for the key things you should know to help your portfolio weather these market changes.

Check out our new Community Guide, full of places to visit in Barton County.

It's that time of year. Time to nominate the "Best of Community" -- lets show our appreciation to those that work behind the scene through out the year to help make this community what it. - Nominations close Feb. 3 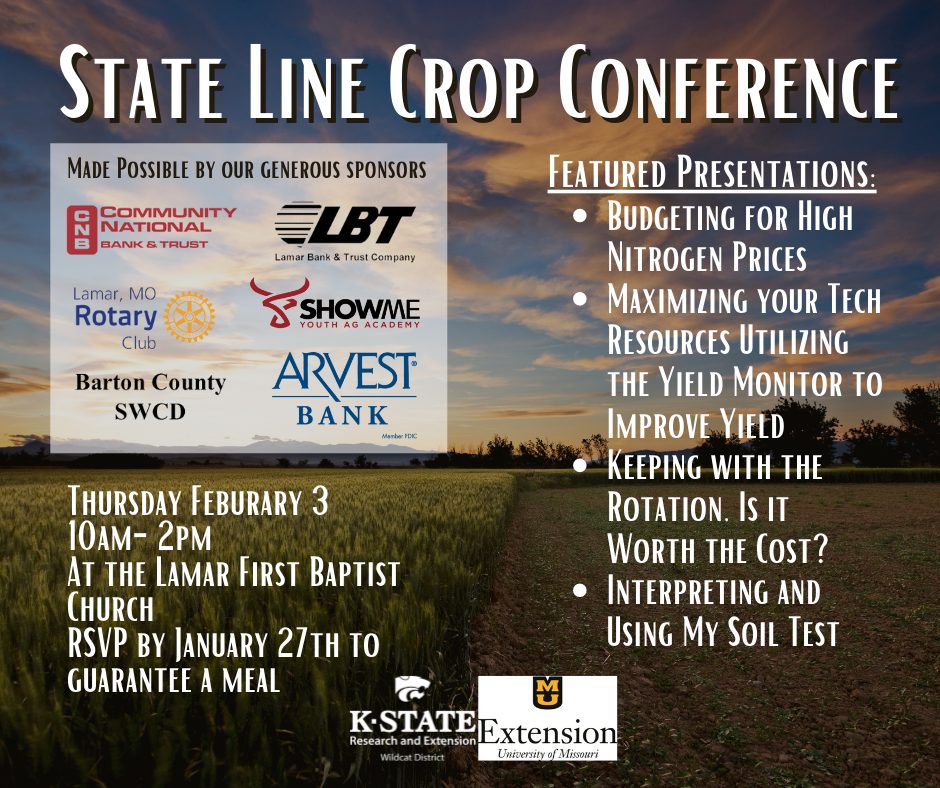 Kansas State Research and Extension and University of Missouri Extension is partnering to hold a State Line Crops Conference on February 3 from 10:00am to 2:00pm at the Lamar First Baptist Church in Lamar, Missouri.

Crop producers are facing some difficult times. Though commodity prices are higher than they were in 2021, inputs, especially fertilizer, have seen a drastic increase. Machinery, fuel, seed, etc. have all risen, but the one topic that keeps rising to the surface now is the cost of fertilizer. That is why the topics covered at this conference are very timely.
Program topics include:

The event is free to attend and lunch is provided, but registration is required. To register via the link below, or call 417-682-3579. ~ RSVP by January 27 to guarantee your meal.

This week, the EPA released a decision that will prevent the use of the herbicides Enlist One (2,4-D choline) and Enlist Duo (2,4-D choline + glyphosate) in five southwestern Missouri counties. These counties include Barton, Bates, Cedar, St. Clair, and Vernon.

These labeling decisions have been made by EPA primarily based on concerns surrounding the protection of endangered species that may "use corn, cotton, or soybean fields for diet and/or habitat". The registrant of these products, Corteva, has indicated that they have already completed additional studies that could address the EPA concerns and so it is possible that some county restrictions may be removed in the coming months, but it is too early to speculate.

Assuming the county restrictions hold for the 2022 growing season, the obvious question being asked by growers who reside in these counties and who had already purchased Enlist soybean seed with the intention of applying the Enlist products is, "What should I plan on doing for my weed management program now?" For growers who find themselves in this situation and have glyphosate-resistant waterhemp (which applies to most of the fields in our state), I would encourage them to use an effective pre-emergence residual herbicide that contains multiple modes of action at or near planting, and plan on coming back post-emergence with a timely application of a glufosinate product.

At the time of this post-emergence glufosinate application, I would also suggest another group 15 residual herbicide (products that contain S-metolachor, acetochor, pyroxasulfone, etc.) which is a program that is referred to as an overlapping or layered residual approach. Overall, this is a program that is still effective on the majority of waterhemp populations in our state. If you are certain that you do not have glyphosate resistance in your waterhemp, a similar approach that includes glyphosate instead of the glufosinate can be followed.

For the remainder of the state where these products will be allowed (non-highlighted counties in Figure 1), it should also be noted that there will be additional new label restrictions that are directed towards reducing off-target movement and protecting endangered species. Some of the more notable of these include: no applications permitted when rainfall is expected within 48 hours or when soils are fully saturated; no irrigation that could produce runoff within 48 hours after application; requirement of a downwind 30-foot buffer; and no applications permitted after soybean crops are in bloom. All applicators should check the modified labels to make sure they comply with these new requirements prior to use in the 2022 growing season.

On December 8, 2021.
The Region M Waste Management District approved to announce a FY2023 (July 1, 2022 through June 30, 2023) grant opportunity for waste reduction and recycling projects of local governments, businesses, and other entities.

Application and other pertinent informational documents are available at https://www.regionm.org/grants, or by request at the address, telephone, mail, or email listed below.

Final applications must be received no later than 12:00 pm (noon) Monday, January 31, 2022 to be considered for funding. Applicants are strongly encouraged to contact Region M prior to submitting a final application.

The Vibe Style and Beauty, LLC is looking for part-time Sales associate working 10 to 20 hours a week. Looking for a positive, upbeat, outgoing person with knowledge of apparel styling.  No retail experience required and pay is minimum wage.

McDonald's
More Than Just a Job 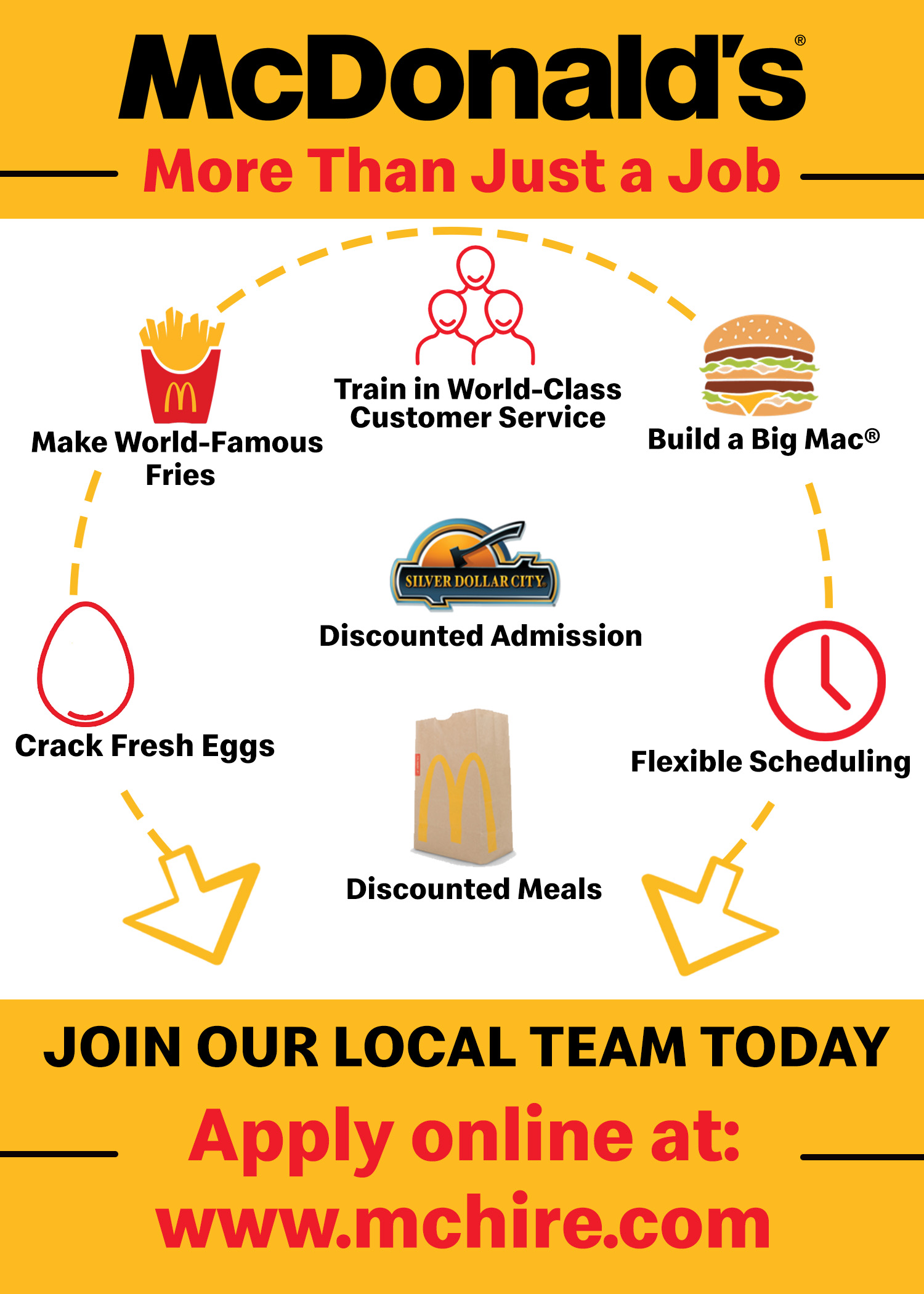 Applicants must be willing to work hands-on and be available to work full time and occasional weekends. Prevailing wage jobs/benefits are available to skilled applicants!
Apply on our website today - sproulsconstruction.com  or
Call our office  417-682-9577

Speciality Risk Insurance
We are hiring! To learn more about our open positions send your resume to info@prevent-risk.com

Now Hiring
Looking for laborers on an as needed basis.
Must be strong, hardworking and willing to work on short notice.

Starting At $17 Per Hour

Apply At www.littleelevescleaning.com or from Little Elves Facebook Page 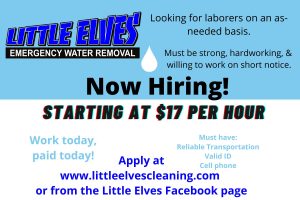 Please contact Clements Plumbing by stopping by their location, calling their office (417) 682-3797 or send an email to clementsplbg@sbcglobal.net

Thank-you for the great year of Picnic In the Park 2021!!! We look forward to seeing you in the spring.

Steven Edward Rock, age 67, of Lamar, Missouri, passed away on January 12, 2022. In lieu of a memorial service, the family will hold a celebration of life in the spring. 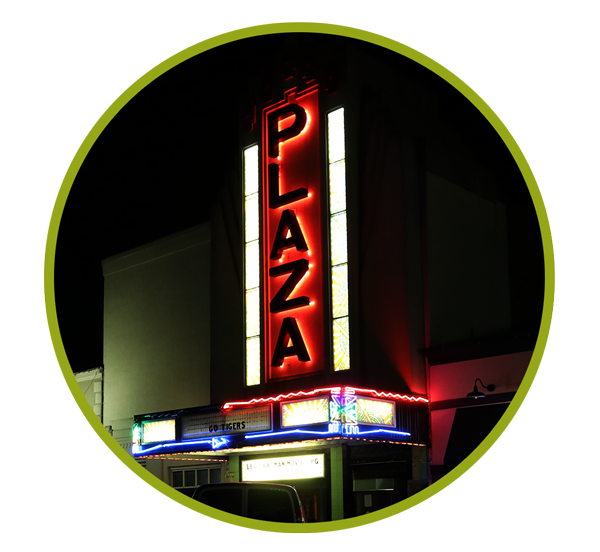 The Plaza Theater
On The Lamar Downtown Square 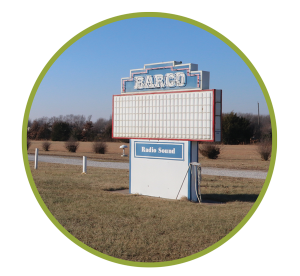 Closed For Season.
Thank you for a great season! See you in the spring for our 73rd season of entertainment under the stars!

Send any community news to marketing@bartoncounty.com